Ever since I was a child, I had no desire to eat this blank page of a starch that I was forced to ingest at every meal. My appetite was more eager for the side dishes my mother cooked than this bland, white mound that was meant to make me feel satiated.

My family became so accustomed to my disdain of rice that every time they reached into the steaming rice cooker to scoop a portion into our individual bowls, they would show me and ask, “Enough?”

I noted with satisfaction that it was always much less than everyone else’s serving.

Moving to Indonesia busted my preference to consume less rice.

Indonesians, like other Asians, do not believe a meal is complete without it, and white rice is king.

I could not escape this grain if I wanted to eat. So I succumbed to nationalistic culinary pressure and dutifully shaped bite-sized portions with my right hand and ate it.

But while living here, I discovered that rice was not indigenous to Indonesia, which came as a surprise because this country is currently the third-largest producer and one of the largest consumers of rice in the world. Research revealed that short-grain, domesticated rice originated from China and the Yangtze River roughly 12,000 years ago, and over the centuries migrated towards Southeast Asia. Evidence of rice and its cultivation in Indonesia can be found carved into Hindu stone temples in Java from the 8th and 9th century.

So what were the indigenous inhabitants of Indonesia eating before rice existed?

Many plants in Indonesia have a high-starch content, and eating these starches proved to be nutritious and satiated Indonesians for centuries. For example, the starches stored in the trunks of trees, like sagu, or in the roots of plants, like ubi, keladi or singkong, were cooked directly or extracted to make other items, like kue or krupuk.

Singkong is not a new vegetable to me. I had become familiar with its various culinary uses in Indonesia — fermented into tape, boiled into sup, fried into krupuk, baked into kue. But one characteristic remained constant — it was dense to eat.

Not in Kalimantan Tengah.

I traveled to Kuala Kurun, a small city three hours north of Palangkaraya, where Dayak culture is more prominent because of its proximity to nature still untouched by mankind. I was introduced to a housewife, Mama Ole, who was going to teach me how to make Kopu, a singkong-based dish. My initial thought was, “Okay, singkong. It is probably going to be fried, boiled or steamed.”

If you can re-imagine singkong as a cloud in powder form, that is what Kopu is. Mind blown? Yes, mine was too.

Before rice existed, Dayaks in this region would process singkong by soaking it in fresh water until soft and drying. This allowed them to stock up on the starch until they needed to eat. The dried singkong is hard and crumbly in texture, and resembles the topping to sprinkle on a New York coffee cake or a British fruit crumble.

The cooking is simple. The singkong crumble is briefly rehydrated and, along with kelapa parut, added to a wok over low heat. The mixture is constantly stirred to ensure the singkong does not stick to the bottom of the wok and burn. Low heat cooks the starch slowly and evenly, and as the kelapa dries, its oil coats the crumbles so they do not stick together. The final texture is a white fluff, soft to the touch and taste. Kopu can be made sweet or savory, depending on the palate or what it will be served with.

During her demonstration, I asked Mama Ole about Kopu’s history and place in Dayak culture. She explained that before rice was introduced to the island, singkong grew abundantly on their land, meaning there was always a steady supply of the root to harvest. But when rice arrived, the financial prospects of cultivating it drove them to cut down swaths of rainforest and convert hectares of land into paddies. At first, when rice was not yet widespread, it was mixed with Kopu to provide a sufficient serving of starch at meal times, but once rice dominated, the making and consumption of it faded through the centuries.

As I took my first bite, I was in no-rice heaven. The little crumbles of singkong turned into soft and ever-so-slightly chewy morsels scented with kelapa. I would have been content to eat it on its own, but I was offered salted fish that had been flash-fried and the combination was delicious — chewy, crunchy, sweet, salty, coconut, seafood. I was meant to live in Indonesia before rice existed.

Even though I speculated the answer, I asked if Dayaks still make Kopu nowadays. Mama Ole shook her head and said very little. If people are just looking for sustenance, rice will always win. Modern times and technology render a multi-day process of soaking and drying singkong inconvenient. With the invention of the rice cooker, a household can have steamed rice ready within the hour. So why bother with Kopu?

Because it is on the verge of vanishing all together. Within one or two generations, it is my theory that no one will know how to make Kopu — centuries of Dayak history manifested in a single recipe.

I will gladly take a few days of work over losing it completely. 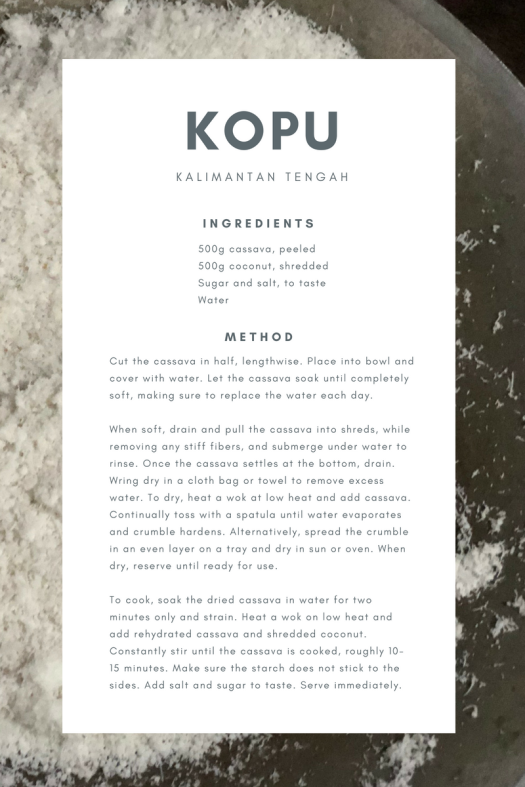