There were too many men.

I had become accustomed to spending quiet, intimate moments with grandmothers, mothers, wives, aunts and daughters in village kitchens across Indonesia in the preceding months. It was a natural connection — woman to woman — and put me at ease, especially because I was a lone, female traveler. I felt comfortable putting my guard down only in the company of other females.

But on this particular stretch of my journey in Kalimantan Tengah, I was surrounded by men. It started when I was introduced to an expert of Dayak Ngaju cuisine through a string of fortuitous connections I made upon arriving on the island. He led me to several households who demonstrated traditional Ngaju cooking techniques and a park ranger who took us on hikes in the jungle. He even drove me to the most remote of villages to experience tribal life, while stopping the car every now and then to forage wild fruits and leaves for me to taste.

I was grateful for his guidance, but I soon became fatigued from the constant companionship of men — ones who would talk about regional cuisine and its history, but never stepping foot in the kitchen, touching so much as a knife to peel garlic.

I needed to be with my people.

That’s when I became acquainted with Pondok Tiga Putri, or The Cottage of Three Princesses, in Kuala Kurun. Ibu Wiwi ran this small restaurant out of her home, popular with local government officials during lunchtime. I spent a delightful morning in the kitchen with her three young daughters, who prepped and cooked alongside her. I was quick to bond with them, and soon she extended an offer to picnic with them the following Sunday afternoon.

That Sunday, while we sat in her car waiting for the girls to buy extra snacks and drinks from a warung, she eyed my face enviously and asked, “How do you keep your skin so soft and smooth?” Thank God, I thought. I’m finally with my people.

Through Ibu Wiwi, I tasted and learned how to make one of my favorite Indonesian sambals — sambal suna. Suna is a wild, young green onion, similar in appearance to ramps with chive-like leaves. This petite allium is typically prepared in its raw state, providing a sharp bite, but mellow enough not to ward off people sitting next to you.

During our picnic, Ibu Wiwi served this sambal with grilled river fish and pork sate, an array of raw and blanched vegetables — cucumbers, eggplants, bittermelon — to allay the spiciness, and steamed white rice. After we ate until our bellies were happy and full, the girls and I jumped into the river — a clear, light-brown stream full of minerals from the soil of the surrounding jungle — and caught guppies with our hands.

I had finally put my guard down.

Note: Substitute suna with chives, or ramps when in season. Substitute rimbang, a sour eggplant, with tomatillos or underripe tomatoes. This sambal is ideally made à la minute, because the window of pungency and freshness of the suna is fleeting after it is pounded. Pair it with grilled seafood and meat. 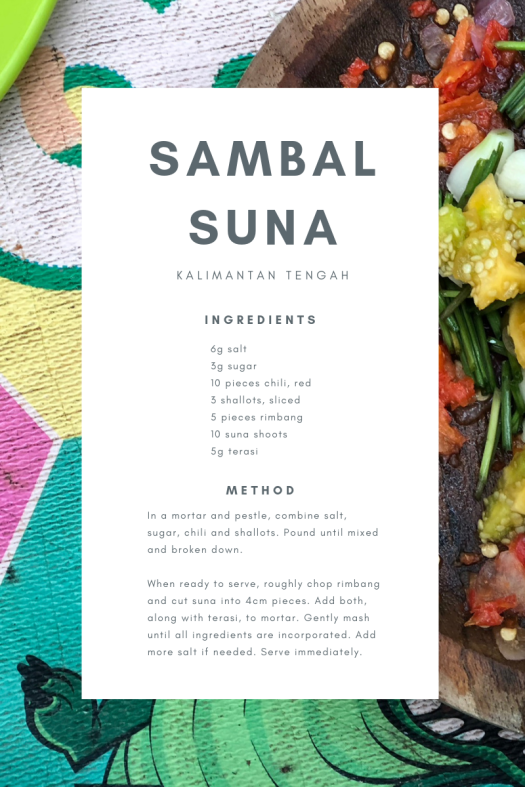